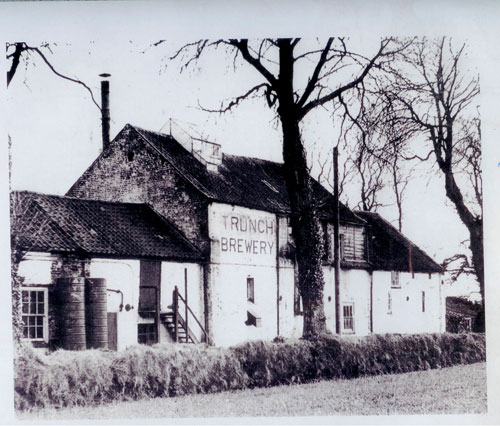 The NORTH NORFOLK BREWERY was founded by William Primrose in 1837.The brewery was later handed down to his son Philip ( one of 14 children).
Philip Smyth Primrose is described in 1877 as brewer & maltster, and agent for Truman, Hanbury, and Buxton’s Stout. The malthouse was at North Walsham. In 1904 W. D. Churchill took over. In 1939 the brewery became registered as a private company. It was taken over by Morgans in 1952.

Its products were advertised in 1938 as being available in Cask, Bottle or CAN. “ Take a carton of cans aboard with you”. The Trunch brewery was a pioneer in the canned beer market. 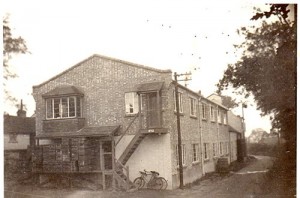 Jenny Campbell-Walker from Lincolnshire, granddaughter of the last owner, sent us a few photos of Trunch Brewery. 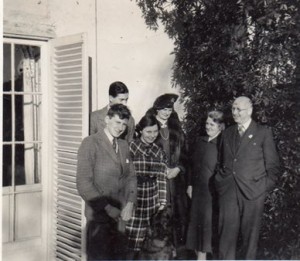 I spent of lot of my Easter holidays,when I was young, at The Brewery House in Trunch, as my grandparents lived there. My grandfather Thomas Baker Jones and his brother Arthur Lloyd Jones owned and ran the Trunch Brewery from 1930 when they bought the brewery. My parents were married at the church in Trunch. They are both still alive aged 91 & 95 !!! They had their 66th wedding anniversary this year.

My Grandpa, Thomas Baker Jones, lived and worked with his Brother Arthur Lloyd Jones in Brighton where they were both Brewers, according to the 1911 census. I am not sure if they owned a brewery at that time or worked for someone else.
In 1915 Thomas married Clara at a church in Worcester and they lived in Brighton for some time and had three children Derrick, Cicely (my mother) and Roger. They moved to Trunch , and bought the Brewery and the house in 1930. They lived there until about 1962. 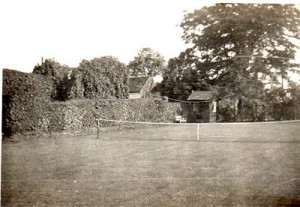 We used to go and stay with them every Easter. I can clearly remember the old Brewery building still being there all the time we visited .
Thomas worked with his brother as joint owners and Arthur lived nearby with his family. 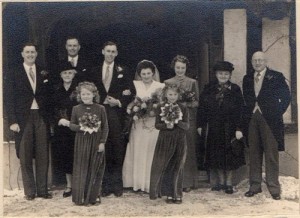 My parents met when both there families lived in Brighton so they met when they were very young. They married in Feb 1947 at Trunch Church, the terrible snowy year. My Dad’s father was H.J.Green of H.J.Green & co packet sponge mix. so as a family we supplied sponges and beer to the nation!

Thomas and Arthur also owned several Hotels and public houses, including The Bath Hotel in Cromer and The Cross Keys Hotel in North Walsham. 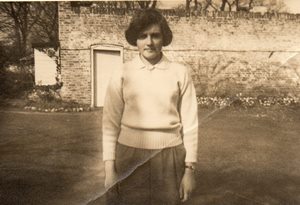 Jenny Walker in garden, door behind her is the potting shed