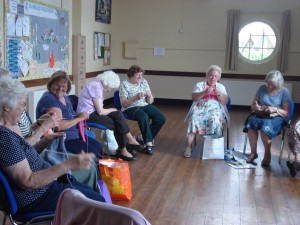 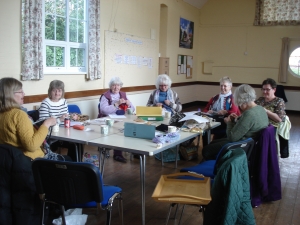 We are the Trunch Group of Norfolk Knitters and Stitchers – www.norfolkknitters.org.uk Members knit, crochet and sew items which are distributed to a wide range of local, national and international charities. We meet once a month on the third Monday at 2.30 p.m. in the Village Hall. Anyone who would like a cup of tea and a chat is welcome, whether you knit or not. Equally some people make items at home but do not come to the meetings. Meetings are free, as we are supported by the Village Society.

NEWS Well we did meet on September 21st. Six members attended and we sat spaced out in the Hall. The face masks did inhibit conversation a bit and we all missed the tea and biscuits but it was very good to see members again. And it was good to see that lovely items of knitting and stitching are still being made. 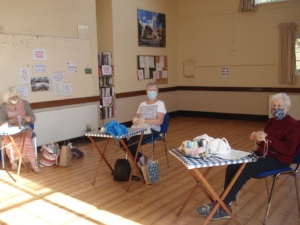 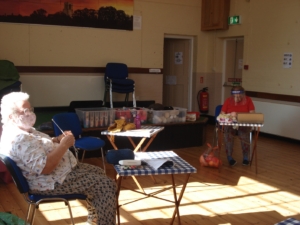 Despite the restrictions due to the Corona Virus, a lot has been going on in Trunch.

We have sent many cannula covers for premature babies to a nurse in Cambridge. She has enough now but the Neonatal Intensive Care Unit at the Norfolk & Norwich would like them. I sent off a parcel at the beginning of May. They would also like some baby blankets – knitted or crocheted. 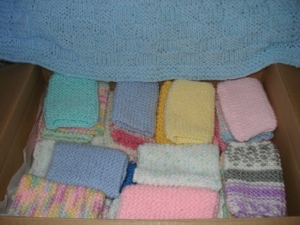 Ear Savers for health and care staff who have to wear masks with elastic round the ears.  As of June 2020 we have sent out 496 to local surgeries and care homes. 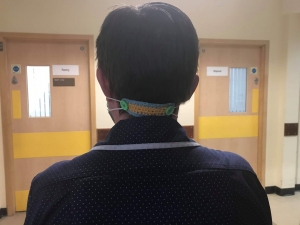 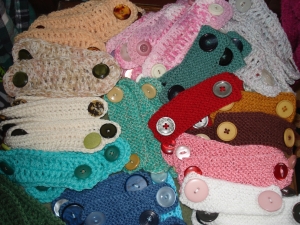 A few of the many ear savers we have made

Unfortunately our meetings and the Easter Sale have had to be cancelled for the time being because of the Corona Virus Pandemic. However members will be keeping in touch with each other by email and telephone and will carry on making items for sale and for charity. I can still provide materials if needed – so just give me a call.

A SALE of clothes, blankets, toys, gifts and Christmas decorations, raised £52 for the Norwich-based LEEWAY charity, which supports  anyone in Norfolk who is experiencing domestic abuse. 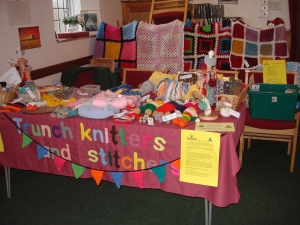 We also had a box for items that can be donated to the charity and people generously gave many toiletries and food items, which together with some of our handmade clothes and toys were taken to the charity drop-off point in Norwich. 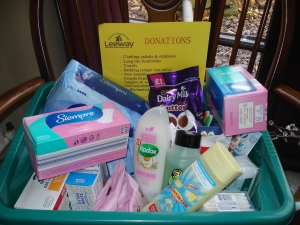 Making good use of some of the left-over wool, which has been donated to us. 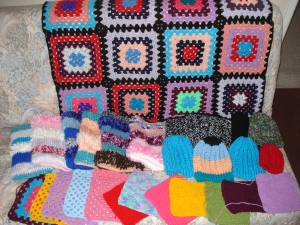 We raised over £80 from our sales towards the Village Hall appeal. 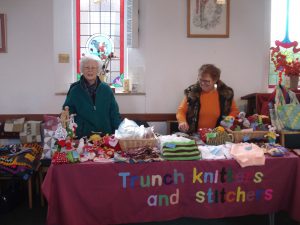 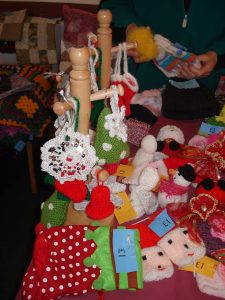 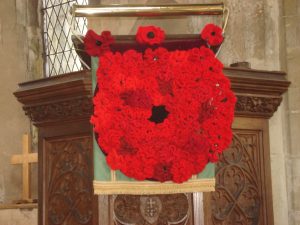 This is the poppy hanging that we have made for the 100 year WW1 commemorations in the Church. Janet Howitt had the idea, several group members knitted and crocheted the poppies, Janet Harmer provided the hessian backing and Vanessa Woofe and Jackie Hudson sewed the poppies on.  It was very well received at a village musical tea on October 26th. when the spare poppies were sold for the Royal British Legion. The idea is that the church can keep the hanging to use in future years.

We have had some wonderful donations of wool over the summer which were left at the shop. Thank you and do keep the donations coming.

We made some seals to donate to Seal and Shore Watch in Mundesley. The toy seals are sold for fund raising.

We are currently making a poppy hanging for the parish church and planning for sales in November and December, with profits going to Trunch Village Hall which needs a major up-grade.

We raised £40 for the Open Door Cafe in Mundesley which was very good considering the weather problems. Well done to everyone who helped. The left over items were taken to the Wool Loft in Norwich for distribution and the Easter gifts were sent to the Forum to be sold for charity during Makers’ Month. I also took a big bag of Snuggle triangles for the Norfolk & Norwich Neonatal Unit. 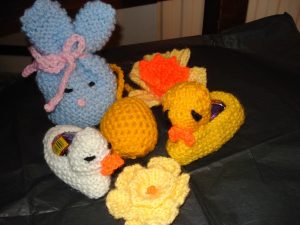 Our sale table at the Methodist Coffee Morning was very successful. We made £55 which has been donated to the Canine Concern charity whose volunteers take their dogs into nursing homes and hospitals and into schools to listen to the children read. Jackie Hudson, one of our members, is a volunteer for them and she takes her dogs into Old People’s Homes in North Norfolk. At the same time, she also has a supply of blankets and sensory bands for those who might welcome them.

The photographs show some of the items that we sold as well as our smart new tablecloth made by Janet Harmer, another valuable member of our group. 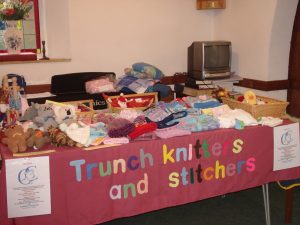 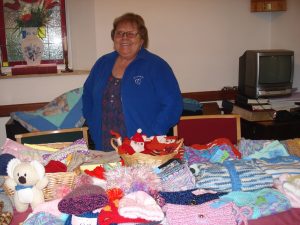 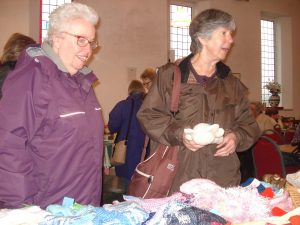 We have very kindly been donated a large quantity of coned wool – really for knitting machines, but it can be hand knitted with several strands together. We have also been given some lovely material for sewing and two big tins of sorted buttons. Thank you all – everything will be put to good use.

We had a sale stall at the Trunch Open Gardens and Scarecrow Day on Sunday July 16th. 2017 and made £57 for Mundesley Inshore Lifeboat. 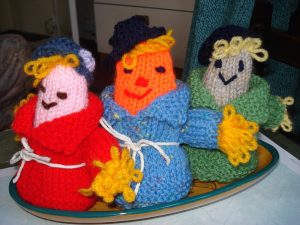 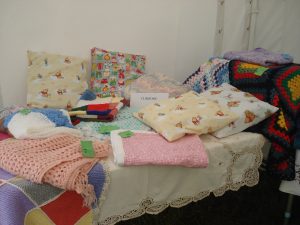 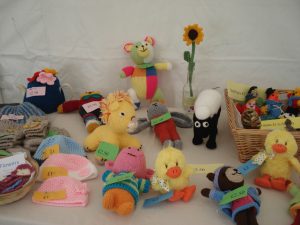 Thanks to everyone who  made the beautiful things to sell, the lovely cakes to eat or who ran or helped on the stalls, including the tombola, raffle, refreshments and other craft stalls. Also thanks to everyone who came to support us at this busy time of year. We sold several blankets but Jackie has taken the left over lap blankets to local care homes. 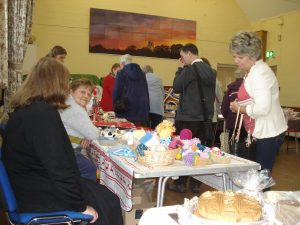 North Walsham Festival 18-26 June 2016 There was an art display of sewn, crocheted and knitted items. I donated a knitted mitred square and a crochet flower. 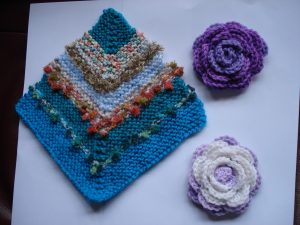 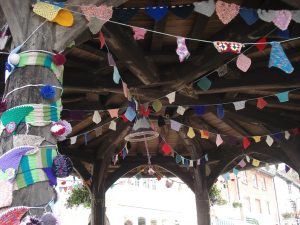 (Spring 2016) we made sensory bands and colourful lap blankets for the Lister Hospital in Stevenage, where the daughter of one of our members works. 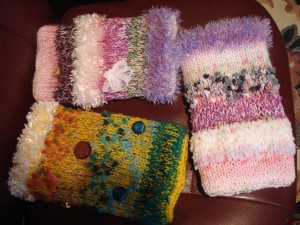 Sensory Bands (right) These have items of different texture sewn inside and out and they are used in care homes and hospitals for dementia patients.

Big Norfolk Knit In – Friday October 9th. 2015  Twelve of us joined other knitters across Norfolk to knit as many squares as we could in 2 hours. We managed 12 complete squares. It was very enjoyable morning. Across the County 685 squares were knitted which were sewn into blankets.

Saturday November 14th. 2015  Craft Fayre in the Village Hall. We raised £64.60 for the East Anglian Children’s Hospice. Well done everyone. 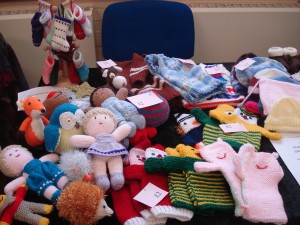 Toys for sale at the craft fayre 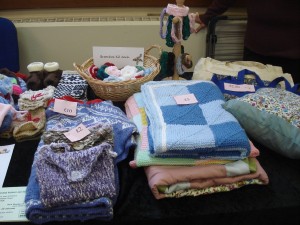 Samples and sales at the Village Hall Fete 2015 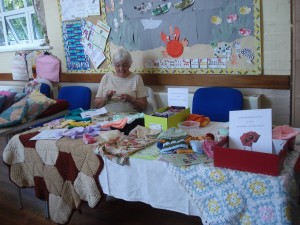 Below is a selection of some of the other items we have made. 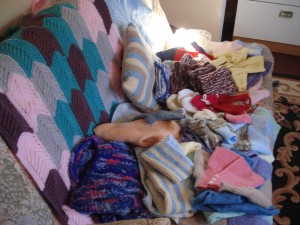 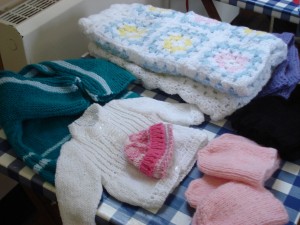 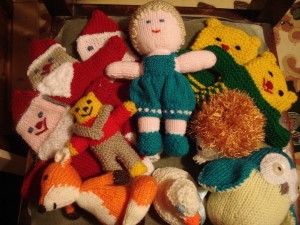