A Parish Plan was compiled by group of volunteers from Trunch which identified the needs and wants of our residents and we created Trunch Village Society to manage and accommodate future projects.

A local farmer loaned the project some land and a secure site to store equipment and then we were ready to apply for an Environmental Agency Exemption Certificate which we obtained in June 2008 and  Norfolk County Council Planning Permission was granted in  October 2008. Grants from Norfolk Community Foundation, Awards for All and Griffon Partnership were received for the equipment and running costs needed for the project.

Our scheme, now into its tenth season, involves collection of green garden waste from around a third of the households in Trunch.

Our composting season is April to October with a special leaf collection in November/December. The composting process is facilitated by using New Zealand boxes which are made from pallets and scaffolding planks donated by local companies.

We operate a weekly collection service on Saturday mornings and have in the region of twenty volunteers who collect, sort, weigh and record the garden waste. 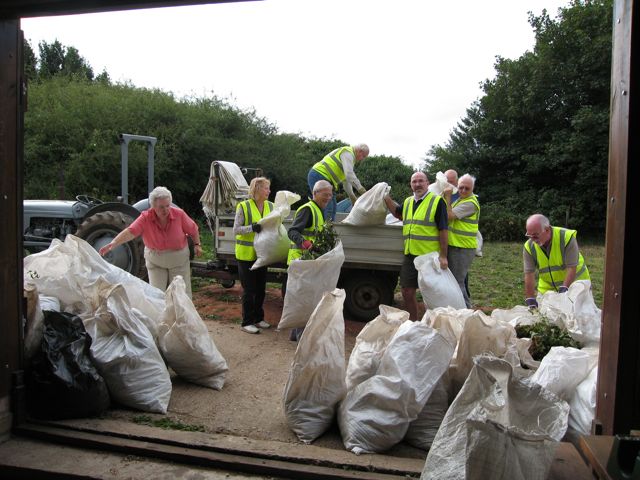 The information is recorded in order that the composting scheme benefits from the ‘credits’ scheme run by Norfolk County Council which pays £56 for each tonne of waste collected. We collect around forty tonnes of garden waste per season. The volunteers are involved in the other mid week activities of shredding shrubby material and sieving and bagging the processed compost. 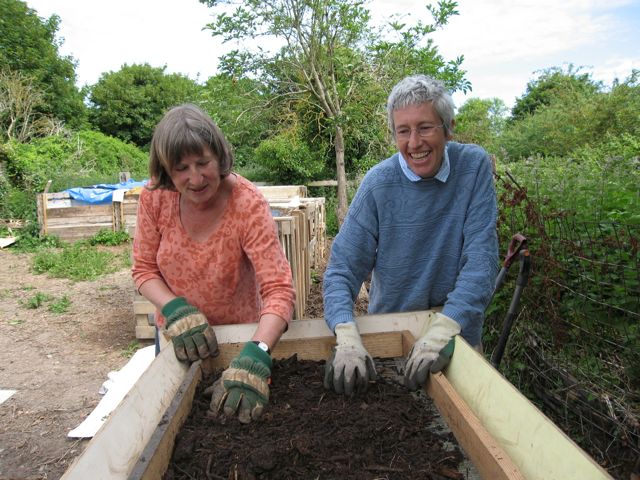 The process of turning garden waste into compost involves feeding the boxes with garden waste and turning and watering them on a regular basis and at the beginning of our operation volunteers managed this process. Now the scheme has expanded we have had great extra help from About With Friends in recent seasons to ease some of the composting process tasks.  The garden waste which is transformed into beautiful black compost is bought back by residents to enhance their gardens. All monies accrued by TCCS go into the Trunch Village Society Account which supports local projects.

In accordance with our recent expansion TCCS have moved to a larger site and a new planning application has been approved. In line with the new Environmental Agency ruling we have obtained an EA permit for our composting activities.

The success of our scheme can be partly measured by the three awards we have secured. In 2009 Norman Lamb presented us with the Felbrigg Green Event, Environment Award.

Our success can also be measured by resident’s uptake of our weekly collection service and by the consistent and reliable way in which volunteers deliver the service. Our scheme gives attention to the village carbon footprint by recycling and returning waste that would go into landfill back into Trunch gardens.

The ‘community’ aspect of our composting scheme is last but by no means least.  Trunch residents can read all about us once a month in the Mardle where they are often invited to come and join us for a cup of tea etc! Many new friendships have been made through our ‘community’ scheme and I am sure each volunteer has a story to tell.

We like to share our community composting experiences with individuals or groups who are looking to set up their own composting schemes. If you would like more information or would like to join Trunch Community Composting Scheme please contact Brian Boughton -01263 720252 0r brianboughton@btinternet.com