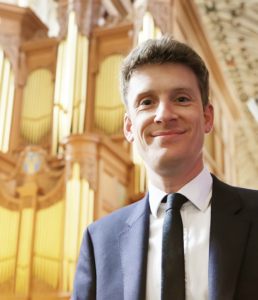 Sunday 11th July 2021, 7.30pm, St. Botolph’s Church, TRUNCH, £15
A programme of favourite organ music, including works by J.S. Bach, Buxtehude, Byrd, Purcell, Elgar, Mendelssohn, Schumann and Vierne.
Ashley Grote with great success performed in Trunch Church in summer 2018, when his organ recital attracted over 70 people in attendance. He made the relatively small Trunch organ, originally created for a stately home, sound like a magic full-sound musical Instrument.
Much in demand as a recitalist, he has performed throughout the UK, USA and Europe with recent concerts in Italy, Germany, Finland and Sweden. His first solo disc, of organ symphonies by Louis Vierne, was described by Gramophone magazine as a ‘top-notch recording’, and his more recent recording of popular organ works from Norwich Cathedral has been heard frequently on BBC Radio 2 and Classic FM.
Ashley Grote has held the post of Master of Music at Norwich Cathedral since September 2012. He is responsible for the day-to-day running of the Cathedral music department, directing the boys’ and girls’ choirs in their busy programme of choral services, concerts, broadcasts, tours and recordings. He also directs the Cathedral Chamber Choir, who perform frequent concerts alongside period instrument ensemble Norwich Baroque.
Ashley began his musical life as a chorister at King’s College, Cambridge 1990-1995 and returned there as organ scholar 2001-2004. As organ scholar at King’s, he performed internationally with the world-famous choir and accompanied numerous recordings, radio and television broadcasts including the annual ‘Festival of Nine Lessons and Carols’.
As a composer and arranger of organ and choral works, he has been published by Oxford University Press, Stainer & Bell, and Encore publications.
Away from music, Ashley has run four London Marathons, raising in excess of £60,000 for Great Ormond Street Hospital, where his daughter has been a patient since 2014. He is also a keen cook, appearing on the 2018 series of BBC ‘MasterChef’.

The performance will take  place in  St. Botolph’s Church in Trunch.
The audience will be seated with social distancing of 2 meters. Face Masks must be worn all the time.
The number of places is limited. Pre-booking only. Tickets – £15.
Tickets are available by phone 01692 402 624 or from Trunch Corner Stores  (t.01263 722072).
All proceeds will be donated to Trunch and Swafield Church restoration projects.

Wind in the Willows

The Pantaloons are a vibrant and anarchic theatre company who bring a vital sense of “play” back to classical performance. The Pantaloons aim to recapture an aspect of Shakespeare’s comedies which the modern naturalistic theatre has lost: the riotous energy of the clown.

“Witty, energetic and accessible” – The Guardian

An evening of hand-clapping, foot-tapping, even dancing in the aisle!
The hot 9-piece soul band will be playing 1960s Memphis Soul hits, with some Blues and Motown, as recorded by artists including Otis Redding, The Drifters,  Etta James, Tina Turner, Sam & Dave, Eddie Floyd and Wilson Pickett.
The Mynx Soul Band band traces its origins back to the late 1960’s when six friends were in a successful band in Essex playing Soul Music.  Over the years the members of the band lost touch with one another, but about 7 years ago one of the members initiated a successful search for the other five original members. Two of these had emigrated (one to Jamaica and one to Australia), but the other four original members (John Lane, Derek Haynes, Jonathan George and John Orley) were reunited, and five younger members joined the reformed band.

Pianist Rachel Fryer will perform Bach’s Goldberg Variations with further exciting specially commissioned variations composed by Michael Finnissy, Nicola Lefanu, Alison Kay, Samuel Becker and Julian Broughton.
Rachel Fryer is a sensitive piano player who is known as much for the depth of her musical understanding as her virtuosity.  She studied in the Royal Scottish Academy of Music and Drama and The Royal College of Music, where she was awarded a Masters Degree in Advanced Performance. Rachel Fryer is equally at home as a soloist, with an orchestra or as an accompanist and has given recitals throughout the UK, including at Croydon’s Fairfield Hall and as part of ‘Live Music Now!’. Her recordings have been broadcast on Classic FM and on European radio and television and she is Visiting Lecturer in Piano Studies for the East Sussex Academy of Music.

All concert proceeds will continue to be donated to restoration and conservation projects for the churches of Trunch, Swafield and Bradfield. The Church and community would like to thank both the audiences and the performers for their generosity. Since 1998 the concerts have raised over £40,000 towards these projects.

Thanks too to the dynamic Trunch Village Society for its support for TRUNCH CONCERTS.

Performers reserve the right to change their programmes from those indicated in the brochure or website.
The organising team will take reasonable steps to give notice if any concert has to be postponed or cancelled. Please check this website for up to date information closer to the dates of the concert.

In June 2019 THIS IS MY THEATRE brought Shakespeare’s Romeo & Juliet to St Nicholas Church (Swafield) and received a very enthusiastic reception.
What people said about the performance at St Nicholas in Swafield:
“Many congratulations on that wonderful evening last night.  By far the best theatre experience I have ever had, completely encompassing and at one with the medieval church. We both felt overcome by it. Thank you!”
“Thanks to you for another enjoyable evening!  I had to keep dodging the daggers from my prime position in the pews! And the music really added to the experience. The actors were all well trained. (I think Romeo actually really loved Juliet in real life!) …  It was as close as I will ever get to a stage play again unless you all put on another one !! Please do!“
Since 2014 St Nicholas Swafield has come under the auspices of St Botolph’s Church, Trunch.

Your support for the concerts and events helps to keep St Botolph’s standing.
One of Norfolk’s finest churches, it is a uniquely beautiful building both for worship and music-making.

The quality of performances at St Botolph’s Church are now very high indeed, increasingly attracting audience from beyond the local vicinity.

All concert proceeds will continue to be donated to St Botolph’s Church restoration projects. The Church and community would like to thank both the audiences and the performers for their generosity. Since 1998 the concerts have raised over £20,000 towards these projects. Thanks too to the dynamic Trunch Village Society for its support for publicity.

Performers reserve the right to change their programmes from those indicated in the brochure or website. The organising team will take reasonable steps to give notice if any concert has to be postponed or cancelled. Please check this website for up to date information closer to the dates of the concert. 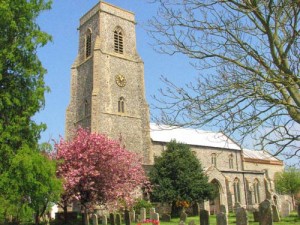 The proceeds from the concerts go to restoration projects at St Botolph’s, one of Norfolk’s finest churches. Musicians give their services very generously in the knowledge of that they too are contributing to the upkeep of this spiritual, architectural and acoustic gem.

In 2005 the tower was secured from splitting. In 2010 the chancel roof was repaired. In 2011 the historic organ was restored ( read about Trunch organ restoration) . Cloakroom facilities were installed in 2014.

St Botolph’s Chancel: You can download the very interesting and detailed document “A history of the Chancel” which was written by the late Anne Horsefield in 2009 to satisfy a requirement of English Heritage.