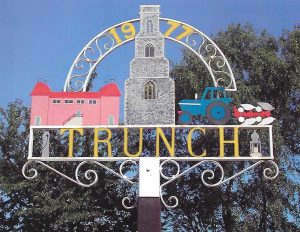 Since the presentation by Mark Ashwell, the Planning Policy Manager of North Norfolk, at the Parish Council Meeting on 5th June a Public Meeting was held in order for residents to express their views on the First Draft of the Local Plan issued for consultation by the North Norfolk District Council. Ed Maxfield our County Councillor and Greg Hayman our District Councillor attended, besides seven Parish Councillors the Clerk and twenty eight residents. After an explanation of the main issues raised in the Plan, Ed and Greg fielded questions and comments from the residents and after a well delivered lively debate from the residents two main issues emerged. Firstly, it was recognised that the NNDC are proposing to make a change of designation of Trunch village from Countryside to an Area for Small Scale Development which would allow some allocation (to be announced in Part 2 of the Plan next Spring) of new ‘open market’ housing. Secondly, concern over the lack of adequate infrastructure and the drastic effect on local services the building of a total of 2590 houses in North Walsham, 909 in Cromer and 117 in Mundesley between 2016 and 2036 will have on us all. Sufficient interest and valid points of concern were raised and as a result the Parish Council and individuals can make reasoned responses to support Trunch remaining a Countryside Area in order to control what type of development (affordable housing), if any, should be allowed and to seek assurances that any development will go hand in hand with the provision of adequate infrastructure and local services. The last matter may require lobbying of Central Government. If you wish to make individual responses, and I urge you to do this, you can do so online by login to