Towns & Villages in the Area around Trunch 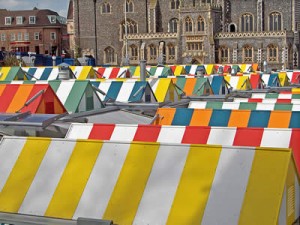 Norwich is one of the top shopping destinations of the UK, with a mix of small individual boutiques and large high street stores.
You will find two modern shopping malls, one of the largest outdoor markets in England and many picturesque lanes, alleys and streets.

Norwich Market remains one of England’s largest and finest open air markets. The market is open Monday to Saturday, with around 200 traditional stalls covered with a canopy of stripped canvas.
(Picture & text by www.TourNorfolk.co.uk) 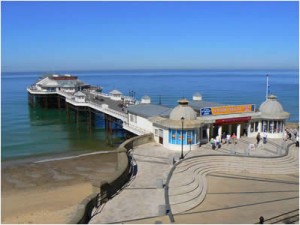 Cromer is a classic North Norfolk seaside town, situated on a cliff-top overlooking fine sandy beaches. Cromer Pier has survived despite bad damage over the years and is a traditional seaside pier with a Lifeboat Station and Pavilion Theatre, which still stages end of pier shows. Cromer was developed into a significant resort by the late Victorians, when healthy breezes were sought rather than sun-drenched sands. Cromer church dominates the town as it has the tallest tower in Norfolk. The streets and alleys are crammed with shops, pubs, restaurants and cafes. The fishing industry may have declined, but Cromer crabs are still as famous as ever with fishing boats, launched from the beach in season, tending to hundreds of crab pots. Cromer also contains a number of museums including the Lifeboat Museum and the Cromer Museum. The Cromer Carnival is held every summer and is great event for all the family. Not far from Cromer is Felbrigg Hall, one of the finest 17th-century country houses in East Anglia and owned by the National Trust. Finally, new for 2008, is Amazona Zoo, a South American themed zoo on the outskirts of Cromer, a 10 acre site full of animals such as Jaguar, Monkeys and Flamingo. (Picture & text by www.TourNorfolk.co.uk) 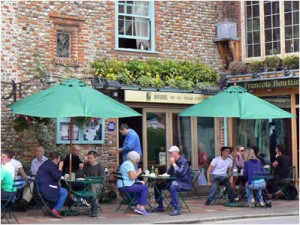 Holt is a lovely rural Georgian North Norfolk town with plenty of unusual shops and surrounded by well-wooded parks. Having been burnt down in 1708, Holt presents a comparatively modern appearance, with a spacious market place.

Holt High Street offers plenty of facilities including pubs, cafes, galleries and shops to enjoy. There is a lovely country park just to the south of Holt and the North Norfolk Railway (the Poppy Line) runs from Holt station to Sheringham.
(Picture & text by www.TourNorfolk.co.uk) 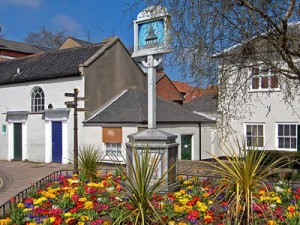 The market town of North Walsham has a wide-range of shops, refreshments and places to stay. It also has a modern leisure centre (with swimming pool). Its close proximity to both the Norfolk Coast and Norfolk Broads make North Walsham a good base for a holiday.

Nearby Bacton Woods are great for a woodland walk or for mountain biking.

Aylsham is an attractive market town, situated beside the upper reaches of the River Bure. Aylsham has an unspoilt market place, surrounded by 18th century houses, reflecting the towns prosperity from the cloth trade during that period. The 15th century church of St. Michael dominates views of Aylsham.
Aylsham is the Northern terminus of the Bure Valley Railway that runs to Wroxham. Aylsham has plenty facilities including interesting shops, pubs and tea-rooms.
Nearby Blickling Hall is a magnificent Jacobean house, garden and park, famed for its long gallery, fine tapestries, paintings and rare books. Blickling Hall is also home to the ghost of Anne Boleyn, Henry VIII’s second queen.
(Picture & text by www.TourNorfolk.co.uk) 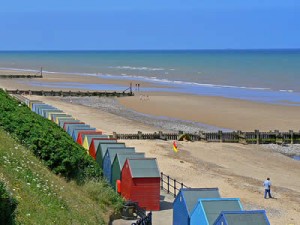 Mundesley is a family holiday resort with a wonderful sandy beach, considered one of the best in Norfolk, with safe swimming for youngsters when the tide is out.

The village contains a number of facilities including a small number of shops, eating places, pubs, tea rooms and possibly the smallest museum in the country – the Maritime Museum. Mundesley church sits perched overlooking the sea and the coast path is great for walks. Nearby Stow Mill is one of the best windmills in Norfolk and well worth a visit. 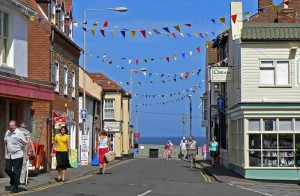 Sheringham is a traditional seaside town. It is home of the North Norfolk Railway (The Poppy Line), which operates steam train rides to Holt. Sea, cliffs, fine sands and bracing air are some of the reasons why Sheringham is so popular. Among the glories of the area are the surrounding woods of Upper Sheringham (including Sheringham Park), with views over the sea.

Sheringham is anything but the monotonous strip, with the promenade running in and out of the low cliffs, while steps and slopes connect it with the town above. It has plenty of facilities, including many interesting shops, pubs, restaurants and tea rooms. There is a popular twice weekly market on Wednesdays and Saturdays. (Picture & text by www.TourNorfolk.co.uk)